Skip to content
Today, I am excited to announce the kick-off of my new interview page called “Spells of Artistry”. I’ve found through my years of hopping around on my ‘lazy susan’ of aesthetic adventures that artists inspire each other without fail. Throughout the ages communities of various artists–musicians, composers, poets, playwrights, novelists, painters, illustrators and actors—have always formed to find inspiration, insight and cherished camaraderie within their groups.
.
In these communities, multi-talents are discovered and encouraged. The animator is an actor and an illustrator. The librettist is a poet and playwright. The singer is an actor and a musician. The writer is a dramatist and a painter of words.
.
When these talents come together as equals and partners with the same energy, the sky is the limit for how the ‘meeting of creative minds’ shapes and changes everyone involved. So, with this objective in mind and heart, I am hoping that “Spells of Artistry” will weave its magic in very exciting and unexpected ways for my readers and contributors. And I am delighted to have Deanna Molinaro here today as we embark upon this journey.
. 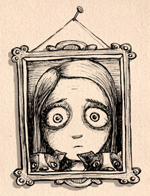 From “That Story About the Rabbit” by Deanna Molinaro

KARA: You once said to me that you tend to destroy and throw away at least half your work. All I can ask is whatever for?!!! But I understand, there’s a bit of Gogol in many talented creators. So have you ever regretted throwing something away? Have you dug through the trash or has Aaron retrieved something you were later grateful for saving?
.
DEANNA: I can’t explain why I throw things away. I mean I can’t explain why I’m so critical. What would it really hurt to keep them, even if I don’t like them? I’ve thrown away tons of drawings/paintings, a novel, and tons of stories, and I don’t really regret it. I do sort of regret throwing away all of my journals from when I was younger.
.
KARA: Speaking of ‘undo’ at least with computers there is always a backup! Which brings me to another question. I am curious, do you draw on paper and scan, or do you use painter or photoshop, or a combination of both? I know animators who like to use ‘either or’ but my guess is you use paper and scan. The pictures have such a nice authentic line and grain like real pencil lines. What’s your technique of choice?
.
DEANNA: I draw everything on paper with pencil, then I ink and sometimes watercolor. Usually if I’m going to paint I scan the pencil sketch and use the printer to get it onto watercolor paper. Sometimes while the sketch is in the computer I’ll move or erase something before I print. I finish out the drawing with pencil before I go forward with painting.
.
I think the computer is a nice tool, but I don’t think I’ll ever use it much. There are artists now making such rich, beautiful digital paintings that I really admire, but I think the stuff I do will always be too simple to justify working on a computer. I also like having everything on paper, and as much as I struggle, I do like the challenge of no “undo.” My “undo” is the trashcan.
.
KARA: Urg. Well, we wish we could see more of your work but respect your dedication to perfecting it. Artistic vision and integrity are personal compasses. Can’t blame us for wanting more books, though! I’m going tell Aaron to hide that trashcan. <grin>
.
What is it like collaborating with Aaron, your very talented artistic husband? Does he give you advice? Do you bounce ideas off each other? You two are a great couple and you know many of my website followers are romance writers and enthusiasts, so it’s nice to hear about successful couples. You make it work; what would you say are the ingredients for keeping an artistic home interesting?
.
DEANNA: Aaron gives me feedback about drawings, encourages me NOT to throw things away (to no avail), and gets onto me when I’m not actively working on any story or artwork at all. When I completed the “Sheep” story he felt like I’d censored the story I’d told him in the first place, and I’m glad he made me go back and fix it. I doubt myself so much that it’s good he jumps in to keep things moving along. He has a way bigger and better imagination than me.
.
After “Sea Monster”, I storyboarded “Inconsolable Octopus” but couldn’t get going on the pictures. He stubbornly said he was going to draw the pics himself if I didn’t. I said that was fine by me, and he hopped right on it. I love his completely different style of drawing, and I can’t even picture now how it would look if I did the pictures myself. Later he told me his own story “Sold to Vampires,” and I wanted him to go draw it. When he finished the drawings I wrote the story he’d told me, and that was fun.
.
I always thought it would be a lot of trouble to collaborate, but we seem to think similarly. We’ll argue about how to park the car, but we can put together our words and pictures without a hitch. I think we are both the happiest when we are creating things, so if we can help each other (or get out of the way) to help make new stuff happen, home life is more like recess.
.
KARA: The story about the alligator boy “As An Alligator” is slightly different in style from the other stories and has solid color. Did you decide to go in a different direction with this one? Why?
.
DEANNA: I can’t remember the occasion, but I wrote and drew ”Alligator” really quickly in a little black and white stapled-together book just for Aaron. Every page has something to do with one of his real-life traits — like his hatred of peas, and his love of popcorn and scary movies. Aaron liked it and wanted me to redraw and color it nicely. I’d never tried to use markers much, but I bought a set and tried them for the illustrations. I guess that’s why this book looks so different. I also drew it a couple years before all of the other stories.
.

KARA: It’s delightful. I could see it on every boy’s bookcase.
.
DEANNA: Once finished, I guess the book seemed more like a real kids’ book than any of the others. It’s all of the child-like aspects of Aaron, but turns out it could be any little boy’s regular day… And I guess it’s a good thing Aaron made me redraw the illustrations, as our dog (a puppy at the time) ate the original little stapled book.
.
KARA: What subject matter or style do you feel would be a real stretch for you? Do you like to push your boundaries?
.
DEANNA: A novel would be a big stretch for me, as I want to sum everything up so quickly. And being assigned anything to write or draw; I freeze up the second there are any rules. I guess I do like to push my boundaries because it’s actually really hard for me to put anything at all out there for public consumption, but I make myself do it anyway.
.
KARA: How can we purchase your enchanting books? Are your drawings also available for purchase?
.
DEANNA: A few of my books are for sale on my website and others will be printed and for sale some time in the future. Some of my drawings are also available as prints on my website, but I’m not sure how much longer I’ll do that.
.
KARA: Any hints you can give us about your next story?
.
DEANNA: I have three stories I’m choosing between to do next, but I think I’m picking the one about someone stealing the moon. You know, if the moon was actually only about five feet high and could be transported in a red wagon — you’ll have to forgive a lot for this one…
.
KARA: Thank you so much Deanna for spending time with my readers and me today! Deanna’s books are available at her “General Store” http://www.deannamolinaro.com/GeneralStore.html and at her “Stuff that I made: Book Titles” on her bookshelf page.