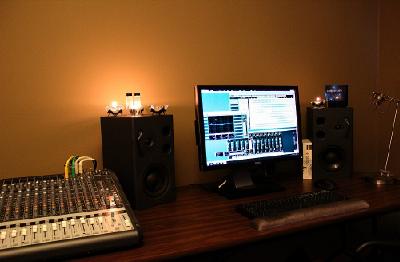 .
KARA: What do you see, in the future, for your music? Are you working on something new? A different technique or challenge you would like to share with us?
.
HH: I am working on a new CD, which should be out sometime near the end of the year, no dates nailed down yet. All the songs are nailed down, I’m just working out the mixes, levels, etc. I’m incrementally adding new software, instruments, effects processors and such, so I’m constantly in learning mode, but I always make an effort to save out successful experiments. I’d like to put out one CD every year, but that’s pretty ambitious for someone who has a full-time job and also wants to draw and paint. There isn’t enough time in the day or even in a lifetime for everything I want to do. I need a dozen lifetimes, at least!
.
KARA: How can we follow your work, hear your music, and purchase a copy of  A Distant Light?
.
HH: You can follow my work and buy all my music via my website at hollanholmesmusic(dot)com
.
KARA: Any thing more you would like the readers to know about  A Distant Light and your music?
.
HH: Just that I’m very thankful that so many people have taken the time to give my music a listen. I am truly honored. I look very forward to sharing my future work.
.
KARA: Thank you for spending this time with my readers and sharing your music, Hollan. We are definitely looking forward to hearing more of it!
.