First, I like to do a giveaway when I blog.  It’s a little incentive for my readers to leave me a comment.  The giveaway for this blog is a $5 Starbucks card.  All you have to do is answer the last question in this blog.

When I look at a cover, I expect it to show me a little bit of the story.  If there is a hot guy on the cover I expect one in the story.  If there is a hitching rail in the background, there had better be a cowboy in the book and it better not be set in New York City.  You get the idea.  Covers are the first contact we have with our reading public and we need to be honest with them through our covers.

I also want a cover that is eye catching with colors that pull at you even when they are in the thumbnail size.  That’s the most important part of a cover.  Since most readers will only see it as a tiny variation of itself, the cover must rock when it’s small.  I have to admit my older covers don’t necessarily do this, so I’m having them redone.

As authors we need to be flexible and find the cover that works.  If your sales are bad, then the first place you need to look is your cover.  Can it be it’s not doing its job?  If you discover that to be the case, then you owe it to yourself and your potential readers to redo it.  I read somewhere that J. A. Konrath, an uber successful author had his covers redone like twenty times before he found the perfect ones and who knows how long they will stay perfect.  Tastes change and our covers need to change with them.

Also, we need to remember that everyone is not going to love our cover and in the end it is us who must love it.  We have to be the first and most enthusiastic fans of our covers.  We should want to display them everywhere and to everyone.  I carry trading cards with me of my books and then hand them out to people I meet.  Face it, if I don’t love my covers who else is going to?

Do you love your covers?  What do you think makes a good cover?  — Cynthia Woolf 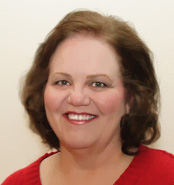 Thank you so much for blogging with us today, Cynthia!

Readers, check out Cynthia’s latest book in her Swords of Gregara series.  -Kara 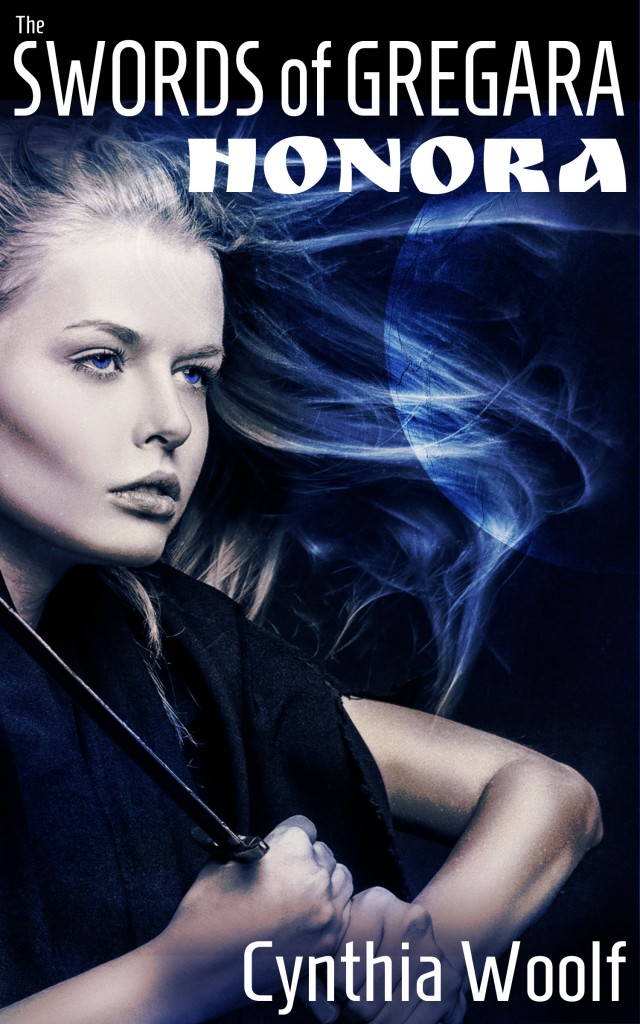 Excerpt from Swords of Gregara — Honora

“Oww” a woman’s voice awash with pain reached his ears.

“You disappoint me, Honora.  You continue to try to escape me.  When will you learn?” asked a whiney voiced man.

When he woke again he was not alone but the man with the whip was gone.  Chained across the room from him, hung by her wrists, was a woman.  He could see the lash marks on her back.  Lash upon lash, new over old.  They obstructed the beautiful tattoo of a dragon on her back.  The blood hard to see within the red of the dragon.

Crawling to her he released her hands from the chains holding her up.  She collapsed in a heap on the floor.  He crawled back to his side of the room as darkness overtook him once more.

The dried blood on her back cracked with each movement, but she worked through the pain as she stretched.  Breathed deep and accepted the pain.  Her sword weighed heavier in her hand than usual.  More evidence of the lashing two nights ago.  She looked down at the unconscious man at her feet.  A new recruit.  A Zolthor,  like herself.  Another reason Perdor punished her for her attempted escape, her sixth try in as many months.

This last punishment was the worst.  Five lashes.  Not enough to incapacitate her but enough to make her remember.  Perdor wanted her to be able to train the new slave.  He wanted them to be a team, good enough to take on all contenders.  He’d be the only owner with two Zolthor fighting for him.  Not just one, but a team.  He was practically wetting himself in anticipation of the beras that he’ll win with a team of Zolthor fighters.

Again she looked down on the naked man.  Long brown lashes lay against his cheek.  A nice contrast to his golden blond hair.  What color eyes did they hide?  Blue?  Green?  Brown perhaps.  She’d find out soon enough.

He was a beautiful man.  Well formed.  Broad shoulders.  Trim waist.  Long muscular legs.  He looked like a warrior.  Would be a good fighter.  Maybe even a good lover as he appeared well endowed there as well.

He’d awakened from the drug induced sleep long enough to crawl over and release her from the chains.  For that she was grateful.  Her wrists didn’t hurt as much as usual because of him.  Using her blade was easier than it had been after her previous punishments.

Time to wake up the sleeping man and get him trained.  Time was short and she intended to make the most of it.  He would learn or he would die.

NOTE from Kara: I’m testing out a new comment filter–so far so good–but if your comment does not show up right away, know that we’ll be checking throughout the day. Have no fear. If a ‘feared –shoot me an email kara@karaashleydey.com  🙂  -Kara xxooxx

14 thoughts on “Covers! What do we want from them?”